If you remember this gem of a post, I let the bomb drop that I’m not the best with grammar/punctuation. It’s true. I place commas where they don’t go, and usually miss a conjunction before said comma. And don’t even get me started on semicolons and em dashes, those are as foreign to me as Ancient Greek or math. #truth

Since we’re on the truth train today, I learned the proper usage of/difference between your/you’re at the beginning of my writing journey, but to this day I still get confused by to and too, though thankfully I’ve got a firm grip on there, their, and they’re, I think…

Interesting tidbit: husband couldn’t force himself to read any of my early manuscripts because they were so messed up. It was too hard for him to concentrate on the story and not get yanked out of it by the glaring grammatical issues.

But, with practice (sooo much practice), I have gotten better at the application of commas and periods. I haven’t had a run-on sentence for like a week, probably because I’m extra liberal when it comes to periods. I gravitate toward short sentences, probably because I think it sounds dramatic. This habit gets even worse during action scenes and first drafts. Let me give you an example.

This is an excerpt from my Fate of Fyre manuscript:

Thick smoke hung off the ceiling, obscuring the deep wood panels. A constant noise of laughter, shouting and curses reverberated off the metal wall panels. Serving girls balanced shining metal trays filled with food and cups. Men shouted for more ale and food. Old warped floorboards creaked and groaned with the pressure. In one corner a man picked notes out of a flute. A large fireplace held an even larger fire. Wood hissed as orange flames bit into the fuel. Stones piled one on top of each other to the ceiling.

Maybe one day I’ll be the pioneer author who starts a worldwide trend of short clippy sentences, that would be awesome.

But until then I’ve got to have tools to help bridge the gap between my skills and actually readable manuscripts.

Here are the tools that help me polish my manuscript so it doesn’t sound like a sugar-high three-year-old face mashed the keyboard.

Consider yourself lucky, because I will discuss each one in excruciating detail below 😉

This tool does one thing, and it does it very well. It tightens, tones, and clarifies writing. You can get a subscription for either one year ($129) or three years ($259) and they also have a subscription for Word and Outlook ($199 and $399 respectively).

After you download the add-on, you’re ready to rake!

I’ll give you a little taste of what it looks like. This is a segment of my story Avaroon. It highlights any issues with concise language, such as unnecessary words. Then you can either accept or reject the recommendations. Typically, it recommends I cut about 8-10% of any given chapter I analyze.

I find this helpful because I can be a little wordy, especially in terms of things like “I will not” and it recommends “I won’t”.

If you aren’t like me, and somehow already write in concise language (I hate you), this tool might not be for you, but I blab. Me? Ramble? Never…

This is my favorite tool, probably because it’s really easy to use, and it covers a lot of useful information. It’s a grammar, style editor, and writing mentor all wrapped up in one.

Here are two screen shots of my manuscript Secret Life: I really, really, really love this program. There are many categories it analyzes, and as you can see from the picture it’s very in-depth. Now, I don’t use all the categories, things like diction can get a little much, but I use most.

I use Style, Grammar, Summary, Sticky sentences, and Echoes, a lot. Like a lot, a lot. But my most favorite category is Overused. It’s amazing.

You can even plug in your personal overused phrases so it can identify those. I’ve got a lot of words like would, could, should, toward, that, against, even, not, and smiled. I’ve got even more, but I’m sure you don’t want to know them all.

This handy program also includes plug-ins for Word, Chrome, and of course the standalone desktop program. I prefer the desktop one, because it goes into more depth and is much easier to use than the add-ons.

I love ProWritingAid, and I see myself always using it even once I have a professional editor.

This program is hardcore, and it’s got a LOT of features. Just like ProWritingAid, you can pick categories for the AI to analyze. They’ve got a ton of categories like poor dialogue, adverbs, clichés, also things like tense, repeated words, and more.

Here it is analyzing my Zoey story for repeated words: 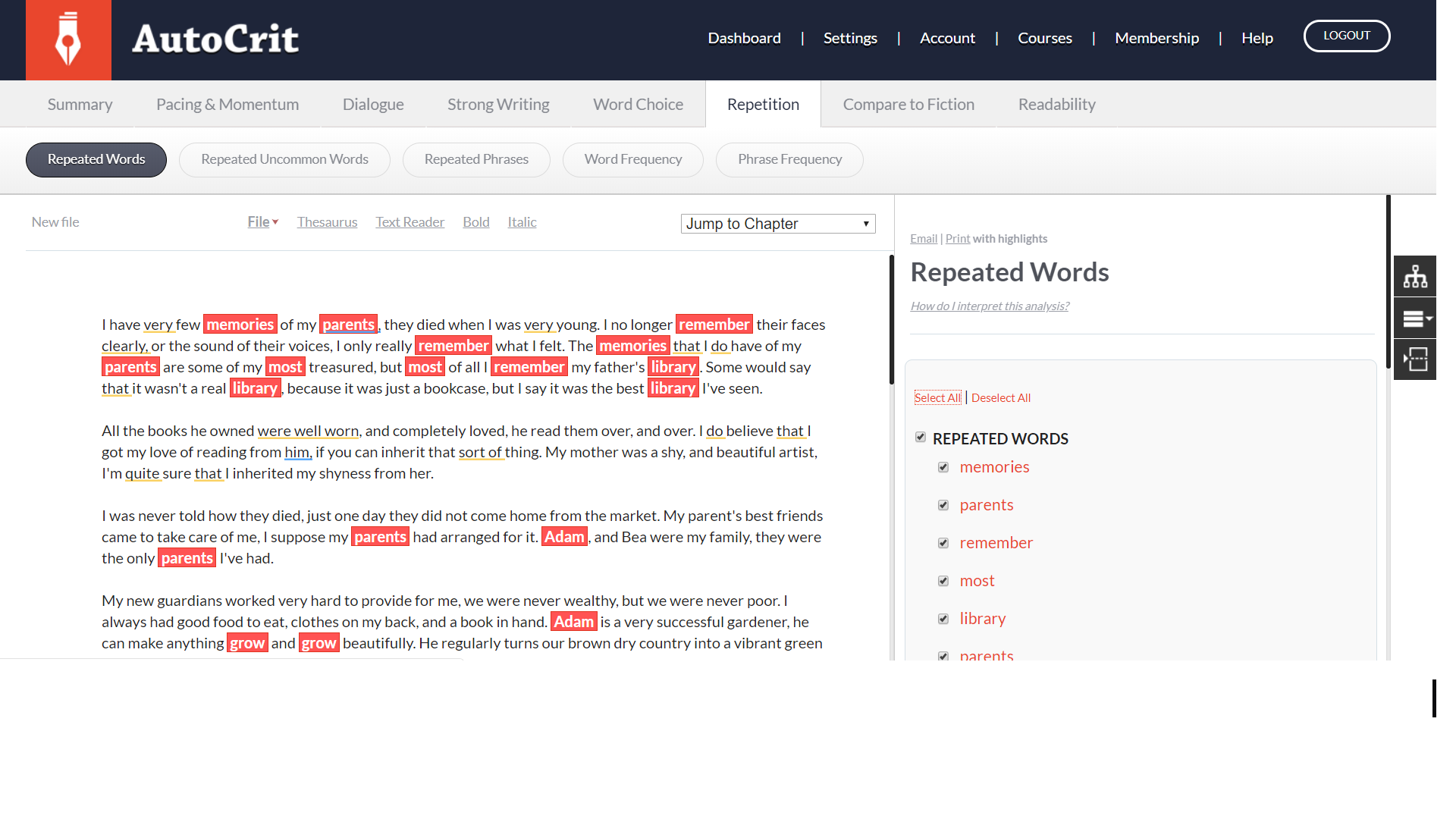 You can see sentence length, variation, and paragraph lengths as well. They also have different features to connect you with editors, agents and other authors.

Besides just being easy to use, it’s got a lot going for it. The Summary Report is in-depth and through, giving you an insight into the internal workings of the writing. It gives you an overall score, which I take pleasure in watching rise as I edit.

Probably my favorite category is dialogue. I love good dialogue, and this tool identifies dialogue tags and adverbs. The dialogue tag category is especially useful because it pinpoints if you have too many of the same.

I usually have to deal with several ‘laughs’, ‘shouts’, and ‘smiled’, so it’s super nice to see all the repeats in one little list.

The last feature I’ll mention is obscure, but worth reviewing for at least two seconds. The Readability tab. It tells you where the text scores in the New Dale Chall, Powers, Sumner, Kearl Write, and other readability test results. It’s cool to see the actual and recommended reading grade levels.

They have a wide range of payment options, and pricing ranges from basic ($10 a month), to Elite at ($80 a month).

What I did was pay for the basic plan only when I was editing my book, since there is no point in paying when you’re not using it. But if you edit constantly and would like to use the additional features, the elite plan is awesome.

Last, but not least, well… maybe least. Cause I don’t use it much…

Even if I find little joy in using this program, it has its merits. It’s got a great user interface, that makes it easy to use. Another nice feature is the sidebar. As you can see from the picture (I’m like so awesome including all these screen shots, I impress myself sometimes), the sidebar includes a rundown of what you’re seeing.

This little segment comes from my manuscript, Story: It analyzes the sentences to find the ones that are hard to read, or very hard to read. But it also finds adverbs and passive voice. Depending on how long the analyzed manuscript is, the numbers change. So if you input a big section you’re allowed more.

It has a handy-dandy desktop app, but does not have plugins for Word or Chrome.

Now, I bet you’re asking why I don’t like it. Great question grasshopper! My other tools cover everything Hemmingway does, and well, it’s a little simple. I find more use from the other tools, but when I first started out writing this tool was a lifesaver.

So you’ve seen all my tools, and I bet you’re saying to yourself “gosh this is kinda a lot…”.

Another great point grasshopper, and you’re right. It’s a LOT. It overwhelms me sometimes. But, it’s worth it, and each tool makes my writing just a little bit better.

As long as we’re on the topic, want to know my editing process? Of course you do, so I’ll regale you with my extensive self-editing process. Prepare yourself, it’s a doozy.

First, I do not edit any scene until I’ve completed the entire book, like typed “The End” done. I’m not a fan of stopping the creation process to start the edit process, it’s a different part of the brain, and I don’t switch. I’m sure at another time I’ll go into my reasons, cause I wanna, but not right now. Suffice it to say that for my first draft, I just get it out.

Once I’ve typed The End, I celebrate my small victory with a day or two off, sugar, sleep, coloring, and sappy romance movies. Once that celebration is complete, I start editing chapter one.

First thing I do is read what I’ve written, and rewrite anything that doesn’t hold up during the read-through. Then, and here is the secret, I save it as a different file, usually adding a number. Example: Zoey 1.1.

After that I run WordRake as my first editing tool, and save the new file as 1.2.

Once that has finished and I’ve incorporated the edits, I go into ProWritingAid. This usually takes an hour or two, because there are so many things this program focuses on. And well, sometimes I’ve got A LOT of work to do. I’m mature enough to admit that. Once complete, I save this document as 1.3.

After ProWritingAid, I go to AutoCrit. This is where I work on dialogue tags, sentence variation, and repetition. Again, this step usually takes an hour or so. I save these changes under 1.4.

I export the AutoCrit changes to Word, and then start on Grammarly, my final pass tool. I save those changes under 1.5.

Why so many files you ask? Because I dread making a change and not remembering the (possibly) better previous version. So if something goes wrong, or if I don’t like the changes I made I can open any previous version and poof! I’ve got it back.

After Grammarly, I read my manuscript aloud. This is a critical step in editing, because a lot of issues with cadence and rhythm cannot be found with any tool, only by ear. It takes the longest (a few days, vs. a few hours for each of the tools), but it is often the most critical.

I move from one chapter to another, over and over and over again until my tired and weary eyes read The End and my ears and throat can’t take anymore. After which, I give myself another two day victory party, complete with a day or two off, sugar, sleep, coloring, and sappy romance movies.

This process works for me, but everyone is different, and YMMV.

Now this beast of a post is done. You’ve seen all the tools that I use and my editing process. It’s crazy isn’t it? Well, it helps, as evidenced by the fact that husband now reads my stuff once its polished. YAY!!

Now, go forth and write! Or edit as the case may be!